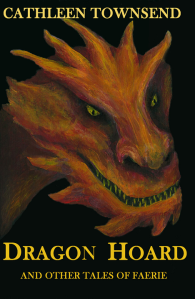 Cathleen Townsend’s Dragon Hoard and Other Tales of Faerie offers the reader the variety of adventures one expects from a well-edited short story collection, but manages to do so while also organizing the book around off-beat and entertaining twists on fairy tales and folklore. The appearance of characters from outside the standard slate of characters adds even greater variety and interest to the mix.

There’s also some refreshing variety in how Townsend tweaks these old tales, with fresh treatments of character, setting, and time. In some cases, such as the title story, “Dragon Hoard,” the faerie character is an old school dragon doing what dragons do, only in a modern setting. Bored with sitting on a vast treasure, the dragon consults a stock broker with the intent of leveraging his fortune into political power. (I wondered if the recent election may have inspired this delightfully wicked tale, but it was published in 2015.)

“Troll,” my favorite, features a very un-troll-like troll who yearns to enjoy a sunrise. Despite his love of beauty for its own sake, he’s still a troll, and knows the sunlight will transform his body into stone. The touching ending reminded me of John Hurt from The Elephant Man. A close second was “Faerie Travel,” an urban fantasy about a young runaway who meets beautiful but deadly faeries and a grubby and devious human.

In “BabaYaga.com,” we encounter a character from Russian folklore who’s set up shop in America. The old witch has partnered with a laughably sleazy salesman who learns that magic plus computers can be a deadly combination. I had to Google Baba Yaga to figure out the ending (bird tracks?), but you know, when the story interests you enough to make you want to learn about folk traditions outside your usual cultural sphere, that’s an added benefit. Another story worth special notice is “Gargoyle,” which manages to be both charming and sad.

Dragon Hoard and Other Tales of Faerie delivers a different kind of ride, offering scares, laughs, and tears. And, for the next few days, it’s free! Highly recommended.