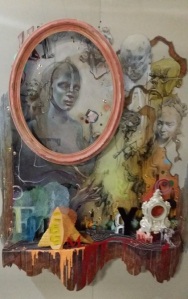 “Like many science fiction authors, I began by writing short stories, which isn’t the norm any more, at least not among British authors today. Today young authors would rather write novels straight off—and that’s precisely why these novels are mostly so poor. In every job you need a certain amount of practice, whether you’re a violinist or a joiner, and short stories offer writers a wonderful chance to acquire the necessary tools. The Mona Lisa, was, after all, not exactly Leonardo da Vinci’s first painting. In any case I learned what it meant to be a writer by writing short stories; what my weaknesses and strengths are.” J. G. Ballard, author of Crash and Empire of the Sun

I wholeheartedly agree with Ballard here. In fact, I wish I’d read his advice 15 years ago, when I wrote two novels that never found any love in the slush piles. As he said, you have to acquire the necessary tools first, and the only way you’ll do that is to start writing, even if it’s junk. As Chuck Jones once put it, “Every artist has thousands of bad drawings in them and the only way to get rid of them is to draw them out.” Ya gotta pay those dues.

As different as long works are from short ones, both share the same essential features, including:

– sympathetic characters who have agency
– the protag’s goal, or elusive desire
– that thing or person preventing the protag from getting what he desires and
– a satisfactory conclusion.

And of course, to varying degrees, there are those more elusive and more difficult to define factors, such as style, believable dialog, foreshadowing, and all the other literary devices that make the story work.

Even flash fiction must have the same essentials listed above, plus as many of the supporting literary devices you can pack into 1,000 words. And in an age where people are drowning in too much information, it’s vital for a writer to learn how to say more with less. What better place to learn than in short literary works?

23 thoughts on “Start with short stories, not novels”