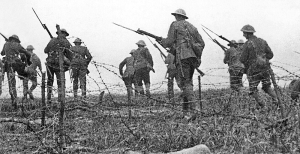 Today is the 100th anniversary of the beginning of the Battle of the Somme. The infantry charge was supposed to have been little more than a mopping-up operation. British artillery had pounded its targets for five days, ensuring — at least in the minds of the military staff — that the area would be defenseless. (Robert E. Lee used the same tactic at Gettsyburg, another great and tragic battle which began on July 1. Pickett’s Charge, like the Somme, was similarly conceived as a final stroke at a broken enemy, but instead resulted in horrendous loss of life.) More than 19,000 British soldiers died on the first day. One of the soldiers caught up in that battle was J.R.R. Tolkien:

According to the British historian Martin Gilbert, who interviewed Tolkien decades later about his combat experience, he came under intense enemy fire. He had heard “the fearful cries of men who had been hit,” Gilbert wrote. “Tolkien and his signalers were always vulnerable.”

Tolkien’s creative mind found an outlet. He began writing the first drafts of his mythology about Middle-earth, as he recalled, “by candle light in bell-tents, even some down in dugouts under shell fire.” In 1917, recuperating from trench fever, Tolkien composed a series of tales involving “gnomes,” dwarves and orcs engaged in a great struggle for his imaginary realm. …

In “The Lord of the Rings,” we meet Frodo Baggins and Samwise Gamgee, Hobbits of the Shire, on a fateful mission to destroy the last Ring of Power and save Middle-earth from enslavement and destruction. The heroism of Tolkien’s characters depends on their capacity to resist evil and their tenacity in the face of defeat. It was this quality that Tolkien witnessed among his comrades on the Western Front.

“I have always been impressed that we are here, surviving, because of the indomitable courage of quite small people against impossible odds,” he explained. The Hobbits were “a reflection of the English soldier,” made small of stature to emphasize “the amazing and unexpected heroism of ordinary men ‘at a pinch.’ ”

Not only did Tolkien’s battle experience give TLOTR its grim authenticity, it also inspired in him a deep respect and fascination for tales of courage and sacrifice. Despite the terrible ordeal that WWI proved to be, its lessons, filtered and interpreted by a skilled writer, are a treasured part of our heritage. Lest we forget.

20 thoughts on “How J.R.R. Tolkien Found Mordor on the Western Front”