One of the few writing books I keep on my desk is Stephen King’s On Writing. It’s really two separate works. The second half offers one of the most concise and useful guides to clear, lively writing ever written.

But it begins with a short bio of the author, a life story I was not previously aware of. Despite (because of?) his success, Mr. King grappled with both alcohol and drug addiction. Though he didn’t overcome these problems until a forceful intervention by fed-up friends and family, he did deal with his addictions the best he could. As he puts it, a part of him recognized the problem: “It began to scream for help in the only way it knew how, through my fiction and through my monsters.” (On Writing, p. 96)

The Shining and The Tommyknockers express how that part of his psyche regarded his addiction. But Misery, in my opinion, is a more profound and revealing image of addiction. Annie Wilkes, the psychotic nurse who both idolizes and tortures the protagonist, symbolizes cocaine, which makes you feel good at first but extracts a heavy toll.

Notice that the protagonists in all three novels are writers. Hmm.

Other authors have imagined monsters as symbols for their deepest wounds. In The Recognition of H.P. Lovecraft, a marvelous account of Lovecraft’s posthumous rise to celebrity, S. T. Joshi observes that Lovecraft’s monsters “were not to be taken literally but as symbols for the philosophical conceptions he sought to convey.” (p. 283) Lovecraft’s gods and demons have no regard for puny humans. A self-described man of “extreme sensitiveness,” Lovecraft long nursed an aching nostalgia for lost innocence and shattered ideals, victims of an impersonal, cold universe. His tales of isolation, despair, and creeping terror reflect his view of the uncaring forces that control human destiny.

A similar dynamic is evident in Rosemary’s Baby, Ira Levin’s classic. Levin did not believe in devils, but his most famous novel uses Satan as a symbol of the real evil people commit out of greed. Rosemary is not only lied to by people she trusts, but is betrayed by her own husband, who allows her to be raped for his own personal gain. Treachery is the ultimate evil, which Dante believed to merit punishment in the ninth circle of hell. I imagine Levin would have agreed.

Like Loading...
Michel Houellebecq, the bad boy of French literature, launched his tumultuous career with the publication of H.P. Lovecraft: Against the World, Against Life.

A rogue’s views on a rogue. How fitting.

The edition pictured above (cool cover, huh?) includes a useful and knowledgeable introduction by Stephen King, who regards Lovecraft as both mentor and muse. In this, King is not alone — he notes other accomplished writers who, in King’s words, “have been touched by Lovecraft and his dreams,” such as Harlan Ellison, Kingsley Amis, Neil Gaiman, Flannery O’Connor, Fred Chappell, and Joyce Carol Oates.

Houellebecq’s compact work uses Lovecraft’s biography as a springboard for a lively introduction to weird fiction, Lovecraft’s unique contributions to that sub-genre, and as a well-argued case for a greater appreciation for Lovecraft as an author. Few can deny Lovecraft’s livid, overflowing imagination, but many dismiss him as a second-rate writer and craftsman. This, declares Houellebecq, is simply wrong. Lovecraft’s style perfectly matches his subject matter and worldview.

Lovecraft has never been rivaled in this. His way of using mathematical concepts, of precisely indicating the topography of each location of a drama, his mythology, his imaginary demoniac library, have all been borrowed; but no one has ever attempted to imitate these passages where he sets aside all stylistic restraint, where adjectives and adverbs pile upon one another to the point of exasperation, and he utters such exclamations of pure delirium such as “Hippopotami should not have human hands and crazy torches…men should not have the heads of crocodiles…” And yet this is the true aim of the work. p. 88

I must admit that though I have long admired Lovecraft’s story-telling abilities and shocking inventiveness, I considered him only a so-so writer. Monsieur Houellebecq has convinced me otherwise.

The sizable volume on the left (also sporting a great cover!) is another recent acquisition. All the HPL works I’ve read over the years were either borrowed from the library or downloaded from the ‘net — Lovecraft’s fiction is in the public domain. I am now the proud owner of The Complete Fiction of H.P. Lovecraft — with one glaring exception. Despite its title, it does not include “In the Walls of Eryx,” one of my favorite HPL stories. It’s one of his few sci-fi works, and I cannot understand why it wasn’t included.

As Monsieur Houellebecq would put it, “C’est la vie.” 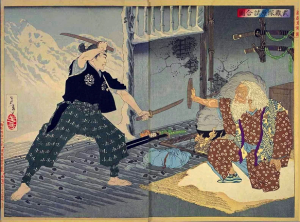 Like many others, the horrific massacre in Paris got me to thinking about how I would have reacted to a terror attack. A number of articles have popped up on the Internet stressing how situational awareness improves your odds of surviving acts of terrorism and similar emergencies. I couldn’t help but notice the ties between situational awareness and writing.

I’ve previously made the case that intense physical activity sharpens the mind and senses. Famed Japanese swordsman Miyamoto Musashi argued the same in his classic The Book of Five Rings. And now we have science that bolsters Musashi’s insights. From Psychology Today:

Musashi referred extensively to training vision and perception through martial arts, but now there is modern evidence in experimental psychology to support his assertions and show that visual abilities can be enhanced with such training. …

Writing in the journal “Attention and Perceptual Psychophysics,” Monica Muinos and Soledad Ballesteros from the Department of Basic Psychology in Madrid, Spain wanted to know if sports training that relied heavily on dynamic visual acuity could interfere with the normal decline in this ability. Using a tracking task where the participants had to rapidly determine the direction and characteristics of object motion, they studied young (less than 30 years) and older (more than 60 years) adults who either had no sporting background or who had training in judo or karate. Not surprisingly, martial arts athletes—both judo and karate—had better dynamic visual acuity scores than non-athletes. This result supports the idea that martial arts training may enhance dynamic visual acuity.

In the following clip, Matt Damon (as Jason Bourne) explains how attention to seemingly trivial details is essential to survival:

Awareness of the fine details others overlook is something every writer must develop. As Stephen King wrote in On Writing, “Skills in description, dialogue, and character development all boil down to seeing or hearing clearly and then transcribing what you see or hear with equal clarity.”

As I’ve said before, the act of reading and writing stories isn’t just a diversion from life, it is life itself.