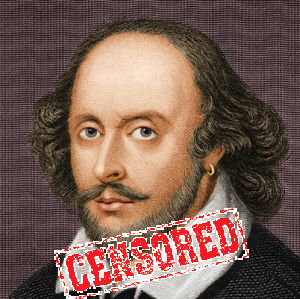 Shakespeare’s Romeo and Juliet had a happy ending. In Hamlet, Ophelia accidentally drowned. And when Lady Macbeth gazed upon her guilty hand, she cried, “Out, crimson spot!”

Doesn’t sound quite right, does it? But those are some of the edits Thomas Bowdler made to render Shakespeare less violent and less frightening. Bowdler’s 1818 The Family Shakespeare removed what Bowdler called “those words and expressions… which cannot with propriety be read aloud in a family.”

In fact, Bowdler’s work was appreciated in Victorian times, and poet Algernon Charles Swinburne credited Bowdler for making Shakespeare approachable for children. But today, the word “Bowdlerize” signifies the reworking of a piece to make it less offensive, but also weaker and less effective.

Before we start feeling superior to those stuffy old Victorians, we need to pay attention to a growing neo-Bowdler campaign to tone down text that could offend. Sadly, some publishers are resorting to “sensitivity readers” whose explicit job is to Bowdlerize manuscripts:

Before a book is published and released to the public, it’s passed through the hands (and eyes) of many people: an author’s friends and family, an agent and, of course, an editor.

These days, though, a book may get an additional check from an unusual source: a sensitivity reader, a person who, for a nominal fee, will scan the book for racist, sexist or otherwise offensive content. These readers give feedback based on self-ascribed areas of expertise such as “dealing with terminal illness,” “racial dynamics in Muslim communities within families” or “transgender issues.”

The Chicago Tribune story cites the case of author Veronica Roth, whose novel Carve the Mark was denounced “for its portrayal of chronic pain in its main character.”

That’s sad. It’s a rough-and-tumble world out there, and if you can’t handle viewpoints that challenge your sensibilities, you’re in for some rude shocks.

I see this as yet another symptom of a society that’s self-segregated itself into prickly, snarling little dens of conformity. Too many people see the world through a pre-fabricated lens and as a result, cannot cope with views from outside their cocoons. If all you know of the world comes from Fox News or Huffington Post, you feel you must condemn all who fail to uphold the One True Way.

Get away from that computer. Go outside. Talk to real people. At the very least, dare to consider ideas from outside your “Favorites” list. 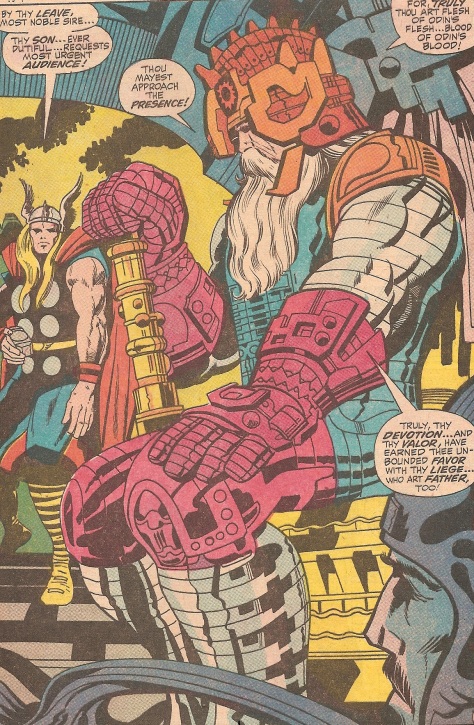 I loved this tribute from playwright John Ostrander:

What makes Jack Kirby the King? For me, it’s this.

Imagination – The word “prodigious” comes to mind. So many concepts, so many characters, bear his mark. So many styles of stories. From the spires of Asgard to the weird distortions of the Negative Zone to the brutal cityscapes of Apokolips, to Ego the Living Planet, no one could top his visuals.

Storytelling – His figures leaped off the page. The panels couldn’t contain the events on them. Even standing still, they vibrated with potential power. There was energy to burn on his pages. You felt them as much as you read them. You couldn’t read the story fast enough and when one issue was done you wanted the next one right now.

Artistry – Okay, his anatomy was not always perfect. And every woman’s face looked the same. He was still one of the best ARTISTS that ever drew a comic because comics are about storytelling and no one beat Kirby as a storyteller.

The featured image is a scan from my copy of The Mighty Thor # 159, from December, 1968. It’s a perfect example of the barely contained power that animates all of Jack Kirby’s illustrations. You can feel the tension in this scene: Thor, despite his earth-shattering might, approaches his father Odin with the most profound respect — and more than a little bit of fear. As well he should: Odin could rage and roar like no other monarch in comicdom.

I have no doubt Marvel Comics in its Silver Age strongly influenced me. Stan Lee and Jack Kirby definitely expanded my vocabulary, often forcing me to set my latest comic down to riffle through the dictionary to discover the meaning of what I’d just read. And the high quality of the stories and characterization I encountered in those comics, as well as the heroic subject matter, whetted my appetite in grade and high school for Beowulf, Shakespeare, science, and history.

Side note on the scanned picture of Thor: At the tender age of 31, barely a year after getting married, I sold my comic book collection. My wife and I needed money for a down payment on a house, and the stern lesson of 1 Corinthians recited at our wedding still reverberated in my ear: “When I was a child, I spoke as a child, I understood as a child, I thought as a child: but when I became a man, I put away childish things.”

So it was time to let go of Spiderman, Daredevil, the Fantastic Four, and the X-Men. But I held on to three of my favorite issues of Thor. I’ve found the best way to move forward is to hold on to a few pieces of a beloved past.