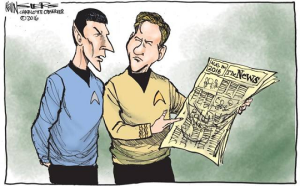 From the Charlotte Observer:

Thanks for all your great entries. This is the first time in You Write the Caption history we’ve had a tie winner, but the judges couldn’t see anyway to avoid that this time. So congrats to great minds, Mike Tuggle and Bill McGloughlin.
———————————–
What can I say? Problem is, the winner is supposed to get the original cartoon. Who will it be? Looks to me like it’s Amok Time! Let the kal-if-fee for the prize begin!

A reader sent me this:

Congrats…….on your Cartoon Caption win! But I don’t get the “It’s Dead”! R—Sent from my iPhone

If you aspire to becoming a certified Star Trek geek like me, you’ll have to learn the classic lines. In numerous scenes from the original series, a character would suffer some sort of unexpected calamity, and Kirk would shout, “What happened?” It was usually Dr. McCoy who’d examine the poor character and announce, “He’s dead, Jim!”

So in the Siers cartoon, Spock is informing Kirk of the fate of print journalism.