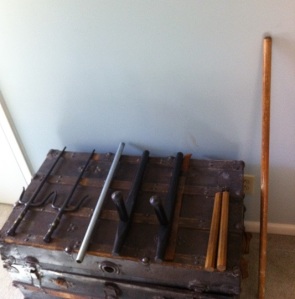 Historical fiction author Kathy Owen has a must-read post at Jami Gold’s writing blog. Owen reminds writers that readers of historical fiction KNOW THEIR HISTORY, so any mistakes in your story will turn off the very people you’re trying to reach.

Of course, that advice is true of any genre. Not long ago, in a manuscript I was critiquing, I read how the protag raised a 2×4 over his head to protect himself from a street thug’s nunchaku attack, but the “numchucks” broke the board in half.

No. Not even Bruce Lee could whip a flailing weapon hard enough to do the work of a sledgehammer. I’ve been studying martial arts for thirty years, and though I don’t compete any more, I still do katas, both empty handed and with kobudo weapons. In the picture above are my favorites. From left to right, we have the sai, short stick (a length of pipe, ’cause I’m cheap), tonfa, nunchaku, and staff (bo).

Over the years, I’ve also learned how to make and use the sling, the atlatl, and bola.

Fantasy fiction fairly bristles with primitive weapons, including dirks, daggers, swords, staffs, and many others. Many of your readers will know the capabilities and limitations of those arms. Some details in a story can be faked, but many cannot. And if you are truly fascinated with your subject, you’ll want hands-on experience, experience that will make your stories come alive. Jean Auel amassed a vast knowledge of primitive survival skills after she determined she wanted to write about prehistoric peoples. I, on the other hand, was taught tracking and hunting skills as a boy, and later took up backpacking. In my early 20s, I studied Isshin-Ryu karate. Only much later did I write fiction based on those passions.

The point is that you have to have not only practical knowledge of your subject, but a love for it. The reader can sense that, and will enjoy your story more as a result.

There’s a scene in Aztec Midnight when Jon Barrett, the protag, must escape his captors and find his kidnapped wife. With only seconds to act, and with an armed guard nearby, he improvises a bola:

There was no time to breathe, no time for a second try. I hooked a weight from the scales into the hole at the end of my leather belt.

Gabriel groped under his vest.

The hook on the second weight slipped into the hole on the other end of the belt.

Gabriel had the gun in his hand.

I dropped forward, crouching on one knee, and used the momentum to swing my bola toward Gabriel.

It snapped in my hand, and I released it. It spiraled through the air and across the room.

The pistol fired and filled the room with an ear-splitting crack.

The bola slapped against Gabriel’s knee and coiled around his legs. The second weight whipped around and smashed into his calf.

Gabriel bellowed and dropped to his knees, eyes clenched shut. I saw him open his eyes, eyes wrinkled in rage and pain, and he leveled the gun at me for a second shot.

I think that worked nicely. It never would’ve sounded believable without 1) my fascination for the subject and 2) knowing what I was writing about, which gave me the confidence to tackle such a scene.

8 thoughts on “Arms and the Writer”