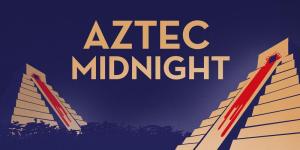 This in-depth report from Bloomberg Business examines the aftermath of the arrest of Joaquin “El Chapo” Guzman. “El Chapo” was not only the real-life figure I modeled my character Hermanito on for Aztec Midnight, he also inspired the name of the book’s Mexican drug cartel that Hermanito led, the Chapos. Guzman combined peasant shrewdness with naked savagery to run his empire:

U.S. and Mexican authorities hailed the capture of Joaquin “El Chapo” Guzman in the Pacific coast town of Mazatlan as a major victory in their war on drugs. A year later the power vacuum caused by his absence is fueling chaos on the streets of Chicago and Ciudad Juárez, across the border from El Paso. …

Guzman secured his near-mythic status by escaping from prison in a laundry cart in 2001 and later unleashing an assassination spree of rival drug lords. Afterward he controlled much of the narcotics entering the U.S. His nickname—“Shorty” in English—belied his outsize reputation. A grade-school dropout, he transformed the drug trade by centralizing everything from warehousing and distribution to collection and transport of money back to Mexico. Five months before his arrest, the U.S. Drug Enforcement Administration’s top official in Chicago at the time, Jack Riley, called Guzman “a logistical genius.” Guzman instilled such fear that he could enforce his rule in northern U.S. cities far from his heavily guarded compound in Mexico’s Sierra Madre mountains.

Brilliant, daring, ruthless, and ambitious — what more could you ask for in a fantasy/thriller villain?