My wife and I went to the Sensoria Celebration of the Arts Festival at Central Piedmont Community College in Charlotte yesterday. We thoroughly enjoyed Molly Manning’s presentation on her latest book, When Books Went to War, which tells the story of the massive and successful effort to provide desperately needed books to America’s fighting men during WW II.

In 1943, the War Department and the publishing industry devised a simple and brilliant plan to provide reading material to millions of men in the U.S. armed forces. The first step was to study standard issue military uniforms and determine the appropriate size for a book that would be easy to carry yet still readable. The end result was the Armed Services Edition book, which was smaller and much lighter than a standard hardbound book. Here’s a picture of some on display at the CPCC library: 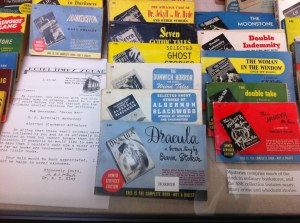 Funny thing, I noticed a copy of Lovecraft’s The Dunwich Horror, and decided I had to sneak a picture. But while I was there, I did not notice the letter beside it. I was delighted when I downloaded the picture to my laptop and read it. Here’s my transcription:

My brother, now serving in the occupational army in Germany, asked me to see if I could secure for him through you the following special editions for soldiers:

He writes that these small volumes have been published by you and he is extremely interested in them but cannot locate them in the vicinity; if possible he would like to own them. He says I couldn’t send a nicer gift as far as books are concerned than those three little books.

Your help would be much appreciated. I would be happy to cover expenses.

That gives you an idea of just how important great stories are to morale. And it suggests the depth of Lovecraft’s appeal.

120 million of these little books went to both the European and Pacific theaters, where they were devoured by eager, grateful GIs. These books introduced a lot of young men to literature, and boosted the careers of Hemingway and F. Scott Fitzgerald. They also made possible the paperback book industry that followed the war. Paperbacks were revolutionary. They were the eBooks of their time. (And I like eBooks!)

Wouldn’t you love to have a copy of that ASE edition of the Lovecraft anthology? Wow.

9 thoughts on “Cthulhu in Foxholes?”