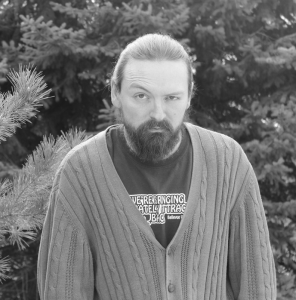 The latest from writer A. E. Stueve sounds like fun — and it’ll be published in January:

Unlike his wife, his family, and his friends, Billy Dodge is alive. Profine, an international pharmaceutical and defense conglomerate, has cured him of an infection that has ravaged the Earth for over a decade. Life isn’t easy for former infected, however, and despite Profine’s help Billy is struggling to cope in a less than welcoming world. When Billy and a friend are blamed for an unfortunate death, things only become more difficult, and Billy finds himself at the center of a global crisis. As Billy wrestles with his inner demons and the strife around him, society struggles with an important question: are formers human, and should they be allowed to live?

A.E. Stueve was born on a bend in the Mississippi River in Southern Illinois in the late 70s. Currently he resides in Omaha, Nebraska where he is a writer, teacher, father, and husband. He holds several degrees in teaching and writing including an MFA in Creative Writing from the University of Nebraska. His novels, The ABCs of Dinkology: Life and The ABCs of Dinkology: Time In-Between from EAB Publishing are available wherever good books are sold.

2 thoughts on “Former Is Coming!”