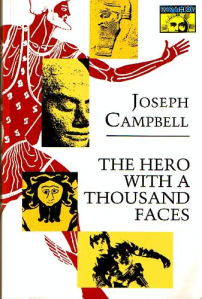 Reprint of Campbell’s classic with Luke Skywalker on the cover.

Some folks have criticized The Force Awakens for drawing too heavily on Star Wars: A New Hope. Writing in The Rolling Stone, David Ehrlich argues that these critics are missing the point. In The Force Awakens, Abrams is “making new” a tale that inspires and excites with each retelling:

The original 1977 movie was innovative in many respects, but it was derivative by design. In creating a galaxy far, far away, Lucas effectively draped his imagination over a constellation of yarns so familiar that they seem to have spun from the marrow of our bones. Its alchemy is nothing if not well documented: A New Hope combined the plot of Akira Kurosawa’s The Hidden Fortress with the widescreen scale of Lawrence of Arabia and the Saturday morning spectacle of serials like Flash Gordon and Buck Rogers. With his 20th-century influences well in hand, Lucas then poured them like molten metal into the iron mold of the hero’s journey as laid out by Joseph Campbell, who traced the origins of modern narrative arcs back to the beginning of civilization. “I wanted a contemporary version of the myth and the fairy tale,” Lucas said in a Los Angeles Times interview published days before Star Wars first hit theaters in 1977.

Whether we’re talking about Beowulf, the Iliad, or Indiana Jones, such stories resonate because, as Ehrlich puts it, “they seem to have spun from the marrow of our bones.” Campbell stripped the heroic myth down to its barest essentials:

A hero ventures forth from the world of common day into a region of supernatural wonder: fabulous forces are there encountered and a decisive victory is won: the hero comes back from this mysterious adventure with the power to bestow boons on his fellow man.

The heroic myth, then, is about leaving behind what was once comforting and familiar, confronting new challenges, and finding one’s place in a world that has changed in many ways, some good, some bad. But the hero now knows he can survive and thrive in that world. Sounds like growing up, doesn’t it?