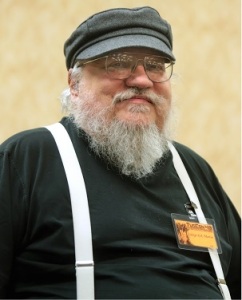 This Irish Times article gives a little background into Martin’s life and what inspired him growing up. Raised in public housing, Martin found escape from his bleak surroundings in the soaring fiction of Robert Heinlein and other science fiction authors.

It would seem Martin’s fortunes have changed.

When asked about the near-fanatical devotion sci-fi readers feel about their favorite authors, Martin replies:

“Science fiction, for much of its history – and this goes back to before I was born – was not considered reputable,” says Martin. “It was seen as cheap gutter entertainment. I was a bright kid, but even I had teachers say to me, ‘Why do you read that science-fiction stuff? Why don’t you read real literature?’ You got that kind of snobbism.”

I remember one of my favorite English lit professors catching heat from his peers because he had us read Kurt Vonnegut’s Slaughterhouse Five, now considered a classic. And Vonnegut himself got zinged a few times in his career for writing sci-fi stories.

But as Martin says, times have changed.