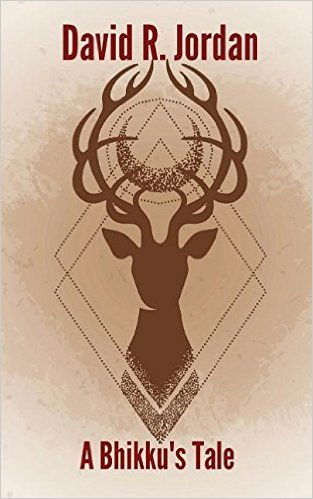 Here’s a new work worthy of your attention. Irish writer David R. Jordan’s second novella is out, and it’s a blast. I’m not sure exactly how to classify A Bhikku’s Tale, other than to say it’s packed with surprises, humor, and action.

Set in an alternate Ireland called Inis Fail (Isle of destiny), the central character is an easy-going monk, or bhikku, named Reilly. Though he spends most of his waking hours meditating, he’s not averse to the temptation of cigarettes and good, strong drink, or wearing Star Wars tee shirts on occasion.

But Reilly’s blissful world gets shaken when the Green Man brings terrible news: Sam the Sybarite (the spirit of luxury) is spreading the news of a marauding Chinese dragon bringing terror and destruction among the peasants and nearby townspeople. Reilly and the Green Man decide to visit the horned god Cernunnos, where they run into Sam, who verifies the news, and adds that Morpheo, the bringer of sleep and dreams, is riding the dragon. But why would a normally benign god do such a thing?

The four decide they need help if they’re going to confront Morpheo and stop him and his dragon. They recruit a shaman named Murray, a girl ghost named Tracy, and a snake. The team finds and, thanks to their mighty snake, destroys the dragon. But while they were preoccupied with the dragon, Morpheo managed to steal part of Cernunnos’ horn, giving the deranged, power-mad god control over nature. The threat is now worse than ever.

As I said, it’s a tough story to pigeonhole. Twisted fairy tale? A romping mash-up of several world mythologies? Read and enjoy this novella and decide for yourself. Whatever you want to call it, it’s thoughtful and entertaining.

A Bhikku’s Tale is now available on Amazon.UK 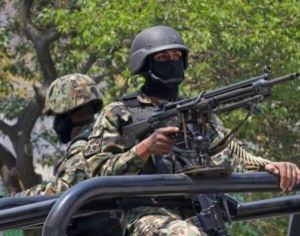 “This novella is small but packs a definite punch. From the very beginning it draws you in and keeps you interested. It also resolves things quickly and cleanly by the last page so there are no loose ends to leave you wondering after you close the book.”

Thanks, Beth! Here are the other reviews of Aztec Midnight, and here’s a link to my publisher, The Novel Fox.

The Manhattan with a twist blog offers readers “an all-encompassing perspective on living in New York City.” The site’s book review section, The Twisted Library, features this reaction to Aztec Midnight:

The novella follows Dr. Jon Barrett, an American archaeologist who was asked to come down to Mexico and retrieve an ancient, valuable (Aztec) weapon before the drug cartels get to it first. I found myself thinking, “well, this is fun to read” while reading, often, and, given the subject matter, that is a feat. Not many people would view a book that combines history, violence, criminals, and mystery as “fun,” but it truly was. Each page was like another step on an exciting journey, and, as a reader, I really did not have any idea where the story would turn next.

I also particularly enjoyed how the author throws in little romantic parts between the narrator and his wife. For example, when Jon returns home from a tiresome excursion, he walks in on his wife relaxing on the couch, and he takes a moment to simply admire the way she looks. He said it even temporarily alleviated him from the stressful thoughts and events that made up his day. This was a very nice touch, in my opinion. It reminds the readers that although there is a great deal taking place, and whole lot of drama, Dr. Barrett’s number one priority at the end of the day (literally and figuratively) is his wife and his love for her. This knowledge of his character plays an important role when, later, a few of his most prized possessions are put in jeopardy.

This novella is short, but filled to the brim with action and intrigue. Tuggle blends edge-of-your-seat scenarios with realistic and genuine dialogue. The characters are authentic and believable, while the story is unique and undoubtedly fascinating. No matter what your usual genre of books may be, “Aztec Midnight” is worth checking out.

Aztec Midnight is available in ebook and paperback. Check it out!

The world A. E. Stueve creates in his just-released novel Former is warped, chilling, and bristling with menace. Battered and terrified from the Infection War, the survivors distrust one another. Their greatest fear is of formers, people who were once infected with a man-made disease that takes over the mind and fills the victim with one over-powering urge, to attack and eat other people. A shadowy and powerful pharmaceutical firm, Profine, which invented the cure, now houses the formers in compounds where it protects them and works to return them to something close to normal lives.

But the jumpy population outside Profine’s protective compounds is vulnerable to canny and unscrupulous media manipulators. One popular blogfeed is Zex Starshine’s Unreality, where master rabble-rouser Zex Starshine beguiles and horrifies his audience with startling revelations about corporate greed, government conspiracy, and the secret threat of another former uprising. (What are those people planning in those sprawling compounds?)

I know what you’re thinking — this horrifying world sounds like today’s venomous climate of mutual demonization and seething hatreds. In both our world and the world of Former, the Internet, that impossible-to-kill cockroach of misinformation overload, fairly throbs with voices screaming about what “those people” are up to now.

For Billy Dodge, the protagonist of Former, things go from dystopian to apocalyptic when he storms out of a group therapy session for formers like himself and ends up accused of complicity in murder. His only chance of clearing himself is to trust the mysterious figures within Profine. Billy has already lost much, including his wife, who killed herself rather than succumb to the dread disease. His brush with death and survivor guilt have made Billy world-weary, yet he is driven to prove to himself he’s still alive, sometimes in ways that only make things worse.

This novel manages to be both bleak and breathtaking, grim and darkly comical. It’s impossible not to sympathize with Billy Dodge despite his impulsiveness and semi-suicidal urges and bad choices. Billy’s determination to convince himself he’s not only a human being, but still himself, despite the disease that once made him a monster, reminds me of the works of Philip K. Dick.

I’ll make a prediction: This book will be used in writing classes to illustrate the right way to create an unforgettable atmosphere, one that perfectly suits the story that emerges from it. Highly recommended.

You may also be interested in the reviews at Kirkus and Foreword Reviews. 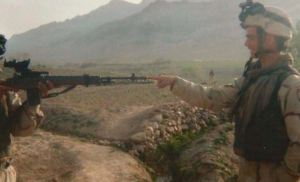 My review of Samuel Finlay’s gritty and gut-busting war novel Breakfast With The Dirt Cult is featured today at the Abbeville Review blog.

Finlay’s fictionalized account of his tour of duty in Afghanistan, Breakfast with the Dirt Cult, is hard to classify. It isn’t a red-white-and-blue “Support our Boys!” kind of tale, nor is it an expose of imperialistic brutes in uniform wielding high-tech machines to murder and subjugate noble savages. So one should not expect this war novel to be “The Green Berets” or “Apocalypse Now.” It is instead a tale that bristles with humor, honesty, and has an edge to it that will alternately have you chuckling or holding your breath.

Read the rest at the Abbeville Review.

I’ve long been fascinated with American Indian culture, and have quite a collection of artifacts. My interest inspired my short story Gooseberry (now free on the publisher’s web site) and Aztec Midnight. So it was especially gratifying to see this generous review on Amazon (and from a “Book Goddess” with a PhD!):

As a professor of American Indian Studies, I’m always wary about misrepresentation of of diverse Indian peoples and cultures. I have no qualms about Tuggle’s research for his novella, Aztec Midnight.It’s packed with action, starting ominously. We discover that Dr. Jon Barrett and his university librarian wife Susanna, are in Cuernavaca for two reasons; she to take a Spanish immersion class and he to find and identify a mysterious Aztec knife. An archaeologist, he specializes in the history of pre-Columbian weapons at the University of Texas in Austin. What Susanna does not know is that he is working for the US Department of State on a mission to help stop drug cartels.

Further plot description would be a spoiler, so it suffices to say that Susanna is kidnapped by a powerful drug cartel. It wants the knife, used far in the past for a sacred ritual in which the hearts are ripped out of those to be sacrificed. It has deadly magical powers, and the leader of the cartel wants to use it to destroy the Mexican government. Jon must choose between rescuing his wife or losing her if he does not deliver. His narrative speeds up as he has only five hours to find Susanna. He is chased, jailed, and then abducted by the cartel.I won’t reveal the astonishing ending.

Tuggle also excels in description. Although Cuernavaca sounds like a tourist destination in hell, his rendering of the population is sympathetic and colorful. The author may not realize he has created a power couple worthy of more adventures. The seemingly nerdy professor and his wife are courageous and smart; they deserve a series of their own. I’m looking forward to a sequel! 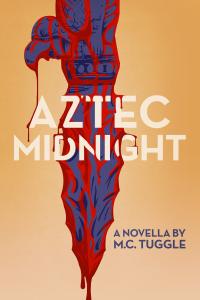 From Cristian Mihai: “This novella is one hell of a roller coaster ride. It’s got just the right amount of suspense, well delivered, to make me want to get to the end as soon as possible. The dialogue is excellent, the plot flows in a natural manner. The story works. It just does.”

Read the rest of Aztec Midnight: a novella by M.C. Tuggle at Cristian Mihai’s blog.

The best fiction and writing blogs, compiled by Bret

Dave’s Corner of the Universe: The 2014 Davie Awards [Most outstanding work in Sci-Fi/Fantasy]
Cristian Mihai: The Angel in the Marble
The Quiet Fantasy Book Blog: Book Review – The Slow Regard of Silent Things
Cindy Knoke: Storm Surge [Coastal scenes that are both beautiful and treacherous]
Thoughts on Fantasy: 5 Ways to Keep Your Dragons Fresh [Great tips for writers! A must read.]
Confessions of a Readaholic: BOOK REVIEW: The Entire Predicament by Lucy Corin
A Writer’s Path: How the Seven-Point Story Structure Can Help Your Writing [This is EXCELLENT!]
Sarah C. Roethle: Print Book Giveaway!